Cufflinks in the Garden

Larter & Sons grape vine cufflinks, circa 1900.
Cufflinks in the Garden

I have been enjoying a short, sporadic vacation recently, so this note may be a little disorganized and uncharacteristically brief. One of the areas neglected during my absence (besides blog posting) has been the garden. Despite the neglect, it has been a glorious season for the flowers with the Full Moon Coreopsis in full bloom and the Ruby Dwarf Helenium coming into its own. With the garden on my mind it is appropriate to post several pairs of antique cufflinks featuring flowers and plants.

Chrysanthemum and vine cufflinks, circa 1910.

A riot of wild chrysanthemums flourishes across these eight-sided cufflinks, a scene that recalls the Japanese woodcuts of the 1800s. The influence of Japanese art on Art Nouveau design can be seen in the flowing tendrils and vines that curl like wind-blown wisps of smoke between the flowers. Within the small area of the cufflinks (less than 5/8" across) I count eight blossoms in various stages of bloom. Created by United Jewelers in 14kt gold, circa 1910.

Carrington rose and thistle cufflinks, circa 1920.

Carrington cufflinks with elegant rose and thistle borders. A client suggested that the rose-and-thistle motif may be a subtle celebration of Scottish-English unity, but I am inclined to believe that the design was chosen more for its beauty than any political allusion.

Initially, I described the centers of these cufflinks as radiant sunbursts. Now that I am in a floral frame of mind the centers appear more like dramatic flowers evocative of the stylized lotus blossoms and papyrus fronds of the Pharaohs or ancient India. Perhaps a reader with greater knowledge of the flora and iconography of the ancient world can shed some light. These eclectic cufflinks were crafted by Carrington & Company in 14kt gold, circa 1920. 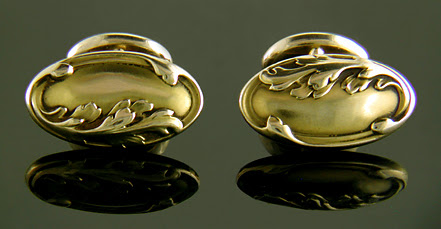 In the early 1900s, the Newark-based jewelry firm, Larter & Sons, created a wonderful collection Art Nouveau inspired cufflinks. The entwining grape vine cufflinks at the top of this post are a nice example. The acanthus leaf cufflinks pictured here further illustrate the firm's ability to create dramatic cufflinks with flowing, organic designs. The acanthus leaves appear to be slowly encroaching across the gently domed surface of the cufflinks. Created by Larter & Sons in 14kt gold, circa 1900.

To view these these and other fine antique cufflinks,
please visit the Antique Cufflink Gallery.