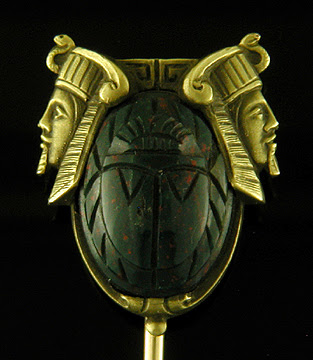 Hans Brassler was a wonderfully imaginative designer who created jewels and other fine objects during the first half of the 20th century. He was born in Germany, studied jewelry design in Paris and is rumored to have medaled at the 1900 Exposition Universelle. In 1909 he founded The Brassler Company in Newark, New Jersey where he served as artistic director and chief designer. Over the next half-dozen years he played with the Art Nouveau, Arts & Crafts, classical and even early Art Deco themes of the early 1900s to create innovative, original cufflinks, brooches, pendants and other jewels. The breadth and imagination of his work can be seen in the following brief survey of Brassler stickpins. 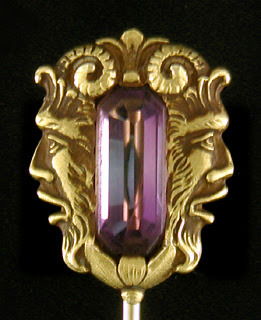 Brassler found inspiration in a variety of sources ranging from classical mythology to the emerging design trends of the early 20th century.  This classically inspired stickpin features two profiles of Bacchus, the God of Wine, framing a rich purple amethyst.    The ancient Greeks believed amethyst protected the wearer from intoxication, so this is the perfect jewel for a Bacchanalian revel or even a more sedate wine tasting. 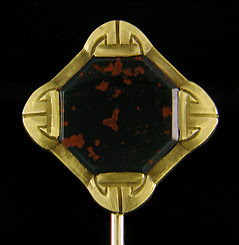 The Arts & Crafts movement drew inspiration from the craftsmanship and arts of the Middle Ages.  This Brassler stickpin reflects the influence of Medieval design with a cruciform top centered by a striking bloodstone.  In the Middle Ages  bloodstone was associated with the martyrdom of the saints and the crucifixion of Christ.  Interest in the symbols and spirituality of the earlier age persisted through the Victorian era and into early 20th century.

Brassler worked with a diverse palette of gemstones. His creations were colored with the rich hues of amethysts, heliotropes, moonstones, citrines and sapphires. Other favored gemstones included black opal and small white pearls. Occasionally, small diamonds offered sparkling accents. Brassler was concerned with the beauty of a gem and how well it complemented the design of the jewel, not its scarcity or monetary worth. 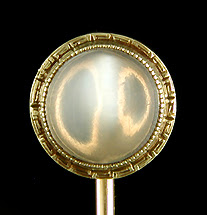 A luminous moonstone is set in a  golden Greek key border. In this second Arts & Crafts, or is it Classical Revival, design the goldwork gives the jewel a mysterious, ancient feel.  You can almost imagine this jewel being excavated from the Treasury of Homer's Troy or a Mycenaean royal tomb.

Brassler took great care in the design and crafting of every aspect of a jewel.  No detail was too small or overlooked.  This is evident in the attention paid to the finish, texture and patina of the goldwork.  For example, the patina of the gold in the Bacchus stickpin (illustrated at the beginning of this note) creates a chiaroscuro of light and shadow which throws the rich details of the design into high relief. Or, the soft, undulating glow of the goldwork of this moonstone stickpin which beautifully complements the luminous glow of the gemstone.  Each aspect of a jewel was chosen to enhance and reinforce the beauty of the others.

Brassler played with and challenged the prevailing design themes of the early 20th century. His vision and imagination often led him to wed elements from disparate styles to create jewels of striking originality.  This is no more evident than in the jewels he created in the Art Nouveau fashion.  This striking citrine and pearl stickpin weds the flowing curves of Art Nouveau design with a lyre shape recalling classical themes and the symmetry favored by the Arts & Crafts movement. 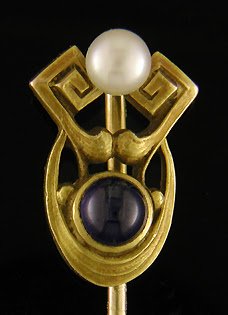 In this Art Nouveau stickpin the boldness of a rich blue cabochon sapphire and outsized white pearl (possibly a replacement) anticipates later Art Deco designs.  A Greek key motif recalls the artist's fondness for classical elements, while the fantastic shape and flowing curves squarely places this stickpin in the Art Nouveau tradition.  Illustrating Brassler's close attention to detail and the artist's love of beautiful gemstones, this stickpin exemplifies Brassler's ability to draw from eclectic design influences and with his imagination create extraordinary jewels.


Brassler and other fine stickpins can be found
in the Antique Stickpin Gallery.

Posted by Antique Cufflink Gallery at 11:43 AM 0 comments


Recent additions to the Antique Cufflink and Jewelry Galleries include a little bit of everything - an Egyptian Revival gold scarab brooch, several antique stickpins and a mesmerizingly elegant pair of cufflinks from the 1920s.

Mesmerizing Elegance  Mesmerizingly elegant cufflinks with stippled borders outlined in black and a profusion of floral and geometric elements.  Created by Wordley, Allsopp & Bliss in 14kt gold,  circa 1925.

Serpent and Wings  The messenger god Mercury carried a staff with fleet wings and entwined serpents.  This stickpin appears to be a variation with soaring wings and a single serpent.  Crafted in 14kt gold,  circa 1900.

Arts & Crafts  The Arts & Crafts movement created jewels of tranquil beauty that found inspiration in natural, organic forms.  This elegant stickpin with a small sparkling diamond is a wonderful example.  Crafted in 14kt gold, circa 1900.

Ancient Egypt  A golden scarab, peacocks and soaring wings - what more could you ask for in an Egyptian Revival brooch?  This richly detailed brooch is crafted in 14kt gold, circa 1900.

The above cufflinks and other fine jewels from the past,
can be found in the Antique Cufflink Gallery
and the Estate Jewelry Gallery