Clues to the Identity of the Fleur-de-lys Maker

The "Fleur-de-lys" Cufflink Maker
Clues to the Identity

Cufflinks of the Fleur-de-lys Maker, circa 1925.

Recently we have been discussing cufflinks created by an unknown maker nicknamed the "Fleur-de-lys Maker". The moniker refers to the distinctive brackets the jeweler used to anchor the cross bars on the reverse of the cufflinks.

In this final post (at least for now) on the Fleur-de-lys Maker I would like to review some of the clues we have to the maker's identity.  Although we have not identified the Fleur-de-lys Maker, these clues offer directions for further research.  Here is what we currently know about this mysterious maker.

Cufflinks of the Fleur-de-lys Maker, circa 1925.

A small body of striking cufflinks is attributed to the Fleur-de-lys Maker. The cufflinks feature richly detailed centers and dramatic borders. They are crafted in platinum and 14kt gold and date from the decades around 1925.

In addition to fleur-de-lys brackets, the cufflinks have distinctive outlines with jutting angles and unsmooth edges. The designs go against the prevailing fashion dicta that cufflinks should have rounded profiles, or at least softened corners, to ease their passage through a buttonhole. The cufflinks of the Fleur-de-lys Maker have a dramatic edginess. 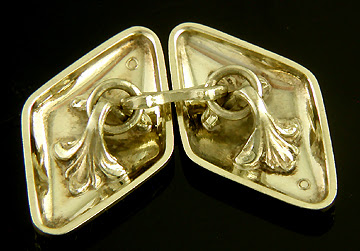 Brackets of the  Fleur-de-lys Maker cufflinks.

The flowing fleur-de-lys brackets have an Art Nouveau feel, while the decorative designs and borders date the cufflinks to the 1920s or early 1930s. A notable cufflink maker during this period  was Charles Keller & Company, a prolific maker of fine cufflinks and other jewels from the 1880s to about 1930.  The firm created a great variety of cufflinks employing a number of linkage and bracket designs. Among them were fleur-de-lys inspired brackets. 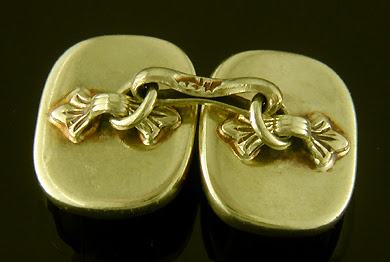 This raises the possibility that Charles Keller is our mystery maker.  But several factors urge caution.  The Charles  Keller fleur-de-lys brackets are stylized and flattened with more of an Art Deco, than an Art Nouveau, feel. Further, although Charles Keller created many beautiful cufflinks, I have yet to encounter an example of the firm's work which matches the exuberant design and careful craftsmanship of our mystery maker.  Charles Keller & Company remains a possibility, but the link, if any, needs to be further explored. 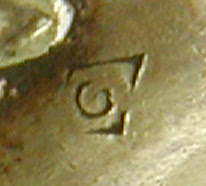 A second possible clue to the identity of the Fleur-de-lys Maker is found on the reverse of the marquise-shape cufflinks pictured at the top of this post.  Just outside of the foot of one of the brackets is an indistinctly struck a "C" or "G" inside a diamond-shape cartouche.  The mark is found on only one reverse and appears to be more accidental, than deliberate.

The Providence-based jewelry manufacture S. B. Champlin Company employed a similar mark in the early 1900s.  Established in 1872 by Stanton B. Champlin, the firm created cufflinks and other jewels until 1931.  But any connection between our mystery maker and S.B. Champlin is for now at best tenuous.  The mark appears on only one cufflink, is indistinct (it may be a "G" instead of "C"), and may have been inadvertent.  Other signed examples of the maker's work will need to be found before drawing any conclusions. 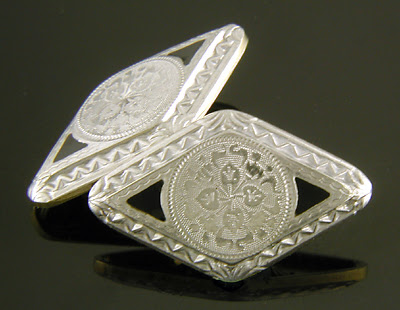 To recap, we have several directions for future possible research, but still no answer to the question "Who was the Fleur-de-lys Maker?"  I would love to hear from any readers who have similar cufflinks or possible knowledge of the maker.  I will be happy to post any new clues that are uncovered and eventually we will solve this riddle.


For more information about these and other fine cufflinks
please visit the Antique Cufflink Gallery.

While recovering from recent back surgery I have been slower than usual in adding new pieces to the Antique Cufflink and Estate Jewelry Galleries. One piece I have had the pleasure of working with is a wonderful Victorian brooch of Flora, the Goddess of Flowers and Spring. An especially apt jewel for this time of year and, of course Mother's Day. I will be adding more jewels in the next several weeks. 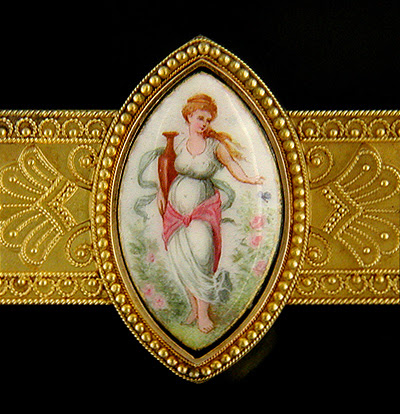 Goddess of Spring A wonderful hand-painted plaque of Flora bestrewing the early Spring landscape with flowers is set in a radiant gold Victorian brooch in the Classical Revival style. Crafted in 18kt gold, circa 1870.

The above brooch and other fine jewels from the past,
can be found in the Estate Jewelry Gallery