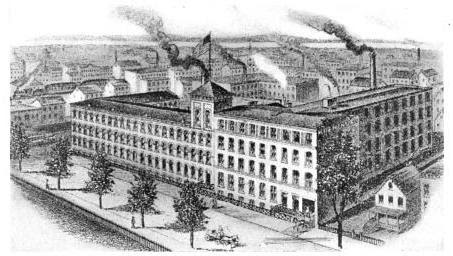 Last month I wrote about the double bean-and-post cufflinks created by Krementz & Co. in the years around 1900. Founded in the 1860s by the eponymous George Krementz, Krementz & Co. was a leader in the creation of fine cufflinks and other gentleman's accessories. In many ways the story of Krementz & Co. is the history of the American jewelry industry over the past 150 years.

In 1912 by the Newark Board of Trade published Newark, the City of Industry with the intent of showing "the metropolis of New Jersey not as it was, and not as it some day may be, but as it is." Following is an excerpt from the publication describing the innovative spirit of Krementz & Co. I have added several photographs below to illustrate points in the excerpt: the photographs are not part of the original publication

In no branch of skilled industry perhaps in the world, have more rapid advances been made than in the jewelers' art, and the industrial pursuits of a kindred nature. In former years, especially for the finer and more artistic productions in these lines, the American people were compelled to look to Europe for their jewelry supplies, but to-day Europeans look to America, to Newark, which manufactures fully seven-eighths of all the jewelry in the whole United States, and is noted for its beauty of designs, excellence of workmanship and highest standards.

One of the more prominent concerns devoted to this important industry, which has done much toward placing Newark to the front as a manufacturer of jewelry and well worthy of more than passing mention is that of Krementz & Co., located at 49 Chestnut Street, with branch offices at 286 Fifth Avenue, New York City and 722 Shreve Building, San Francisco, Cal., was established in 1868 by George Krementz and Julius A. Lebkuecher, which partnership has continued to the present date and has developed into one of the largest and best known firms engaged in the manufacturing of fine 14 karat gold and platinum jewelry, the line being probably the most extensive and complete one of fine jewelry made under one roof.

To give an idea of the magnitude of the Krementz productions, their wares consist of about forty different lines of jewelry, of which the following are the most important:

Krementz & Co. are also the manufacturers of Krementz collar buttons, which enjoy a national reputation; in fact, are known the world over, and are made in 18 karat, 14 karat, and 10 karat gold and 14 karat rolled gold plate. One of the latest achievements of this concern is its new patented Bodkin fastener which it uses on mother-of-pearl vest buttons and studs for evening dress. While these mother-of-pearl dress sets for gentlemen are much in vogue now and finding a very ready sale, this new Bodkin attachment has given a very material impetus to the popularity of this line.

The very newest of its creation is the making of the bean and post of a gentleman's cuff button of one single piece of metal. This feature has greatly increased the output of men's cuff buttons.

The richness, strength, durability and beauty of style and finish of the jewelry which this establishment turns out, are marvelous. A firm and unalterable determination from the start to use nothing but the best and purest among materials, to employ artists of the highest order, and workmen of skill and character, it has built upon this foundation an industry of grandeur and promise.

The illustration shown above of the Krementz building gives an idea of the large space and facilities required in the manufacture of the various products, while in the neighborhood of three hundred skilled workers are continuously employed to conduct this immense business. 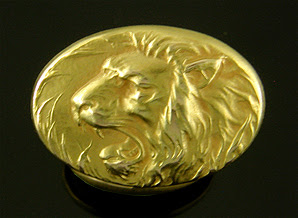 Fine cufflinks created by Krementz & Co. and other notable makers
can be found in the Antique Cufflink Gallery.

The Song  A Native American sings a song of joy or lament, perhaps it is both.  These beautifully sculpted cufflinks were created by Krementz & Co. in 14kt gold,  circa 1900.

Radiant Waves  An energetic series of radiating waves.  These lively Art Deco cufflinks capture the exuberant, festive spirit of the Jazz Age.  They are the bee's knees!  Crafted in 10kt gold,  circa 1925.    Cost:  $485

Hawk's Eye  An elegant tuxedo set with Hawk's Eyes set in yellow gold.  The blue color and chatoyancy of the Hawk's Eye plays beautifully against the warm tones of the yellow gold.  Crafted in 14kt gold, circa 1950.

In the Antique Stickpin Gallery recent additions include a fierce lion from Wordley, Allsopp & Bliss.

Fierce Lion  A menacing lion fiercely glowers and grasps a fiery ruby in its maw.  The mane and visage of the lion are wonderfully detailed.  Crafted in 14kt gold,  circa 1910.    Cost:  $725