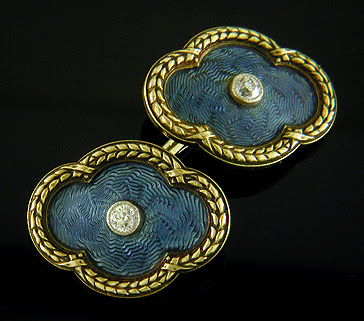 One of the pleasures of antique cufflinks is exploring the great variety of decorative techniques used in their creation. Among the rarer and more beautiful cufflinks are those decorated with guilloche enameling.

Guilloche enamel brings together two venerable and exacting arts - enameling and engine turning. Enameling is the art of fusing powdered glass onto a metal or other substrate. As the powdered glass melts and cools it forms a lustrous vitreous surface. Enameled jewels date back to the ancient Mycenaean civilization of Cyprus. The Mycenaean ornaments (sorry, no cufflinks were found) date to the 13th century BC. The beautiful blue enamel cufflinks pictured at the top of this note are a little more contemporary. They date from around 1920 and were created in the jewelry workshops of Whiteside & Blank.

Engine turning (or guilloche) is the art of mechanically engraving intricate, repeating designs on a metallic or other surface. Among the common guilloche patterns are shimmering radiant stars, wavy lines and spirals, pinstripes, concentric circles and other figures. The Carrington cufflinks pictured above are a beautiful example of the engine turner's art with jagged radiating curves surrounded by an equally intricate border. The depth and fineness of the engraving gives the design a striking three-dimensional appearance. 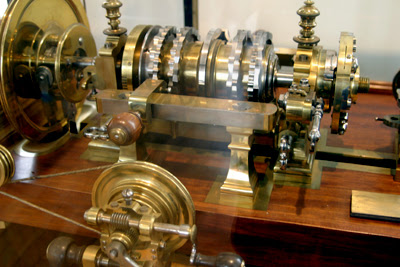 The allure of the machine - a rose engine lathe, circa 1800.

The art of engine turning emerged in Germany during the early 1500s with the invention of the rose engine lathe. Initially applied to softer materials like ivory, the technique was soon adapted to create elaborate designs on metal and glass. At one time in Germany engine turning (or "rose turning") was an enthusiastically pursued pastime of rulers and noblemen. The rose engine lathes, themselves, are beautifully crafted machines that are as intriguing and intricate as the designs they create. 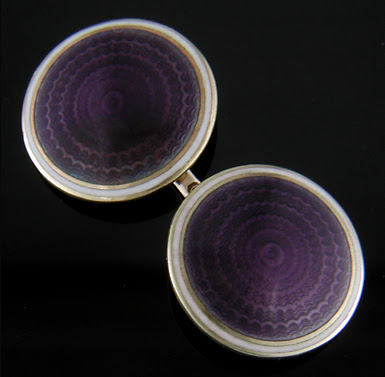 When an engine turned surface is covered with a layer of translucent, colored enamel magic occurs. The colored enamel pools in the valleys of the engraved lines mirroring the engraved design in rich color. Subtle variations in the depth of the engraving are reflected in the shading of the color and the engraved pattern is thrown into stunning relief. The effect is mesmerizing. 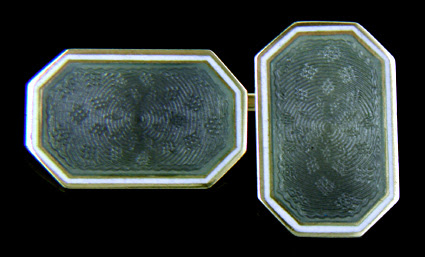 The enthusiasm for guilloche enameling during the late 19th and early 20th century was sparked by the creations of the master Russian jeweler Peter Carl Faberge. Faberge and his work masters created a dazzling array of enameled jewels and objets d'art. In doing so they elevated the arts of engine turning and enameling to new heights. Among Faberge's many enameled creations were cufflinks, desk accessories and the famous Faberge Easter Eggs.

The above Carrington cufflinks may have been inspired by Faberge's work. The subdued blue-gray enamel and classic canted-corner shape of the cufflinks recalls the elegant jewels of the Russian master. They illustrate the simple, elegant designs favored by Carrington & Co. and the firm's uncompromising commitment to craftsmanship.

Equal to Carrington & Co. in creating beautiful guilloche enamel cufflinks was William Huger & Company. Of the two firms Carrington was the more prolific. But what Huger lacked in production numbers the firm more than made up for with the beauty of its designs, as illustrated by the above exquisite example.

The above Huger cufflink features an intricately engine-turned pattern wedded with light blue enamel. The effect is like exploding blue fire works in a dark evening sky. Gold borders of foliate and geometric scrolls frame the enamel centers. 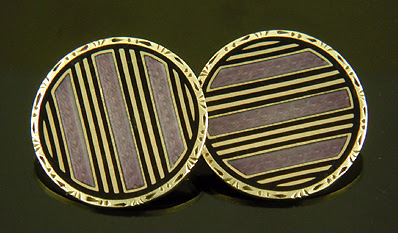 To close, I offer three more examples of guilloche enamel cufflinks. Two of the cufflinks are from small batch makers (Jacob Hookaylo and Taylor & Co.), firms that like William Huger created extraordinarily beautiful cufflinks, but only in limited numbers. The expression "small batch maker" is in analogy to the distillers of fine, but limited run, bourbons and ryes. The other cufflink (above) is by Krementz & Co., a prolific and seemingly ubiquitous manufacturer of fine cufflinks during the late 19th and early 20th century. 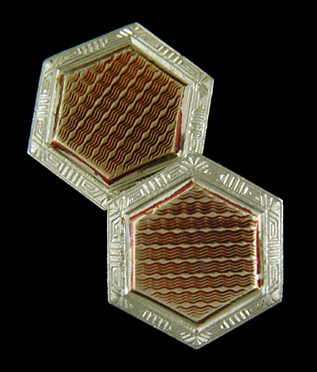 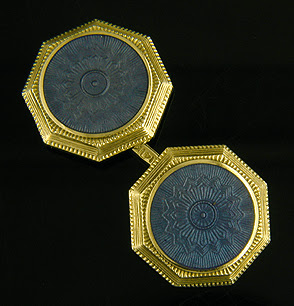 I have had a very busy month acquiring antique cufflinks, stickpins and brooches, but unfortunately only had time to add a beautiful Art Nouveau brooch in the Antique Brooch Gallery.

Art Nouveau Amethyst  The amethyst rests between the flowing wings of an exotic butterfly or bat. Beneath the amethyst a small pearl glows like a distant full moon.  Created in 14kt gold, circa 1900.
Cost:  $785

Among the recent acquisitions are beautiful guilloche enamel cufflinks, a striking French chimera stickpin and several elegant dress sets set with colored gemstones. These and other fine jewels from the past will be added to the antique and estate jewelry galleries in the next few weeks. So stay tuned!

Posted by Antique Cufflink Gallery at 10:55 AM 0 comments