Durand & Company was one of the leading American jewelry makers during the 19th and early 2oth centuries. Although the firm was founded in 1869, the Durand family traces its roots in jewelry and related arts to the pre-Revolutionary era.

Under the leadership of James M. Durand, the firm was renowned for beautiful design and technical innovation. The company was known as a creator of "only the exceptional in jewelry" and an importer of the finest gemstones. During its 75 years, Durand & Company executed many important one-of-a-kind commissions, while also providing cufflinks and other jewels to the finest retail jewelers of the day. At one time the firm was in partnership with Charles Lewis Tiffany.

The platinum and gold cufflinks illustrated above are a beautiful example of the classically inspired cufflinks created by Durand & Company in the early 1900s. The radiant gold centers are dramatically engraved with a repeated chevron pattern. A surrounding course of platinum is also intricately engraved and accented with gold Greek key motifs which form the outer edge of the cufflinks. The cufflinks were crafted in platinum and 14kt gold around 1910. 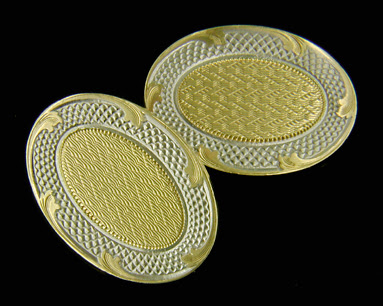 The beauty of the Durand cufflinks was matched by the care with which they were crafted. The backs of the cufflinks are brilliant with a mirror-like finish. The backs are almost as beautiful as the fronts.

Note the sturdy brackets and cross bars that secure the cufflinks on the cuff. The linkage was specially designed by the firm and protected with a patent for "improved cuff buttons" issued in 1908. The maker's mark for Durand & Company - a stylized "D" - is visible just to the left of the gold purity mark ("14K").

Below is the schematic from the 1908 patent. Each of the numerous numbered points indicates parts of the design where the firm took great care to assure that the design would be both convenient and safe. The goal was to create a cufflink that could be put on with minimum fuss, but would remain securely on the cuff. 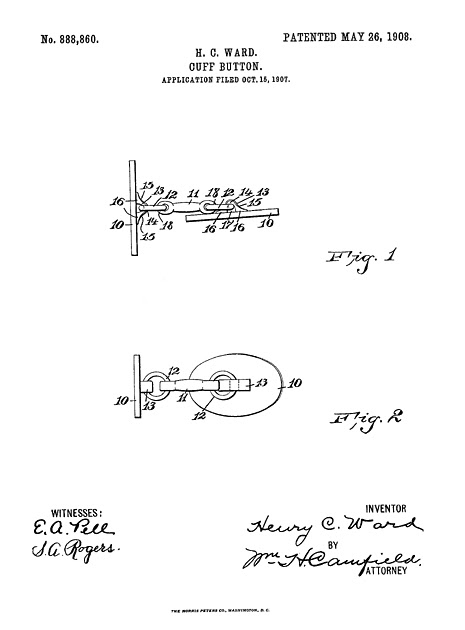 Drawings from 1908 for improved cuff-button design.

A brief passage from the original patent illustrates the extent to which Durand & Company pursued the desiderata of convenience and safety.

The improved feature of the device [cufflinks] is the connection of the bar, connecting the plates, with the back of the plates so as to give a stronger structure, and also to provide one that makes the entrance of each end of the cuff-button, into its side of the cuff, more easy than in the old style of button, due to the structure of the lug [bracket], on the back of the plate ...

It is fair to say that no detail was considered too small when Durand & Company designed a pair of cufflinks. 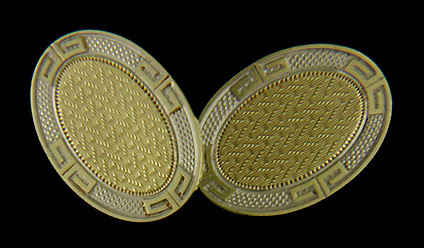 To view these these and other antique cufflinks,
please visit the Antique Cufflink Gallery.

Posted by Antique Cufflink Gallery at 6:01 AM