Acquiring and researching antique cufflinks takes you in many interesting directions.  Often you follow an unpromising lead or stray clue with surprising results.  The following architect's rendering of a fine Victorian home is one such discovery. 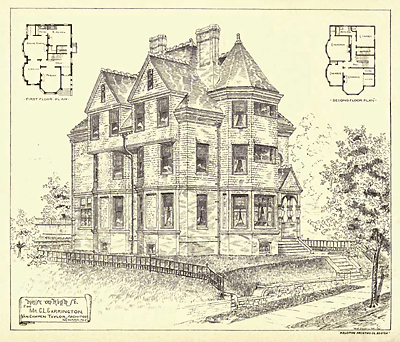 Please click the above rendering for an enlarged view.

In 1885 Charles L. Carrington, later founder of Carrington & Company, was a partner in the jewelry manufacturer Mayhew, Leonard & Carrington.  Since arriving in New York City shortly after the Civil War, his rise in the jewelry trade had been steady and impressive.  In 1885 he decided to provide for his family and celebrate his success by building a stately home in Newark, New Jersey.

Notice of the Carrington house illustrated with the above rendering was published in the August, 1885 issue of American Architects and Building News.

The house is now in course of erection on one of the principal residence streets of the city.  The first story will be built of North River brick, laid in red mortar, with Belleville stone trimmings.  The second story, etc., will be of frame shingled with cedar shingles.  The roof will be slated. The interior will be finished with painted walls, tiled fireplaces and hard-wood stairs and mantels.  The cost will be about $12,000.


By 1900 Mayhew and Leonard had retired and Charles Carrington reformed the firm as Carrington & Co. with his sons serving in various positions. During the first half of the 20th century Carrington & Co. was one of the preeminent maker's of fine cufflinks and dress sets.  Carrington remained active with the firm and lived in his house on High Street until his death in 1924.
- 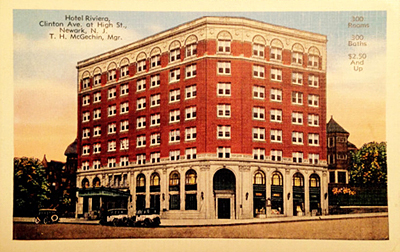 Riviera Hotel with Carrington house to the right, circa 1925.

In old postcards of Newark's storied Riviera Hotel (located at the corner of Clinton Ave. and High Street) the Carrington house can be seen just to the right of the hotel.  The house was lost some time after 1950 and in the 1980s High Street was renamed Dr. Martin Luther King Boulevard.  A recent tour of the area on Google maps suggests that the former house site is now a small parking lot.

Frequent visitors are aware of my enthusiasm for the cufflinks and other jewels created by Carrington & Company.  Examples of Carrington's work can be found in the Antique and Estate Jewelry and Antique Cufflink Galleries.

Posted by Antique Cufflink Gallery at 9:55 AM