Peace and Hope in an Earlier Time of Pandemic 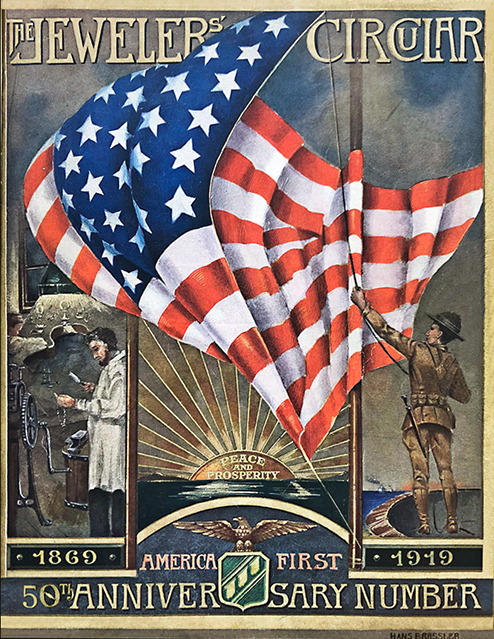 Above is the cover of the 50th anniversary issue of the The Jewelers' Circular, a jewelry trade publication founded in 1869. The anniversary issue appeared shortly after World War I ended with the Armistice of 1918. The cover reflects the celebratory optimism of the time with the hope that economic prosperity and growth would return, advancements in science and technology would brighten the future, and world peace would prevail.

But, it was also a time of uncertainty and doubt as the world endured the ravages of the misnamed "Spanish flu" pandemic. By 1921 an estimated 500 million people had been infected with the virulent strain of the H1N1 virus (close to a third of the world's population) and 50 million people had perished throughout the world. In many ways this magazine cover speaks to the hopes and challenges of our own time as well as its own.

The artist who created the cover was Hans Brassler, a noted artist-jeweler of the early 20th century. Brassler was a gifted Renaissance man who in addition to creating covers for The Jewelers' Circular, designed silver flatware for Tiffany & Company, founded The Brassler Company in 1909 to create artistic, finely crafted jewels, collaborated in the 1930s to create a magnificent silver and gold dinner service for the auto magnate Lawrence Fisher, and designed jewel-set hood ornaments for Cadillacs as well as stained glass windows for the Detroit Cathedral. He was also the father of the noted 20th-century sculptor Margaret Brassler Kane.

Wishing everyone a happy Independence Day and peaceful and safe weekend!


Examples of the fine jewels created by Hans Brassler can found in the Antiques and Estate Jewelry Gallery.

Posted by Antique Cufflink Gallery at 10:45 AM