Last month I wrote about several cufflink makers about whom we know very little beyond the elegant cufflinks they created. This month's note features cufflinks from another "mystery maker", Kohn & Company. 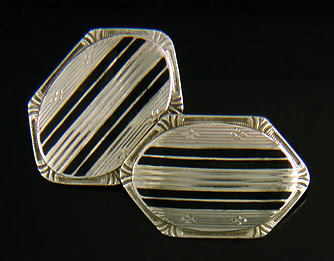 Historical information about Kohn & Company is sketchy. The firm appears to have been founded in the early 1900s and ceased operations in the 1930s or early 1940s. Like many of the fine cufflink makers of the time, Kohn & Company was based in Newark, New Jersey.

The firm created cufflinks and other jewels in 10kt and 14kt white and yellow gold. The cufflinks were sometimes set with small sapphires or diamonds. Dark enamels were also used to highlight the engraved designs and borders.

The cufflinks reflect the broad currents of the Art Deco and Art Moderne design. Occasionally you will observe repeated geometric and linear patterns that are reminiscent of the earlier Arts & Crafts period. The style of the surviving cufflinks and the frequent use of white gold suggest that the firm began creating cufflinks around 1920.

Kohn & Company employed several maker's marks. On cufflinks crafted in 14kt gold the makers mark is a cone lying above a slanted "14K" gold purity mark. A variation of this mark has the gold mark "14K" placed inside the broad end of the cone.

On cufflinks crafted in 10kt gold the mark is the numeral "10" with a oversized "K" between the one and zero. The mark is usually found stamped on one side of the cross bars or on top of the quad brackets on 14kt gold pieces.

Please note, I have not found separate documentation of the 14kt mark shown above. I have attributed the mark to Kohn & Company based on its similarity to known Kohn marks and the shared styles of the cufflinks. This is an area for further research. I am interested in any thoughts from readers.

Kohn & Company cufflinks, circa 1930.
Additional photos of these and other fine antique cufflinks,
can be found in the Antique Cufflink Gallery.

Posted by Antique Cufflink Gallery at 11:39 AM