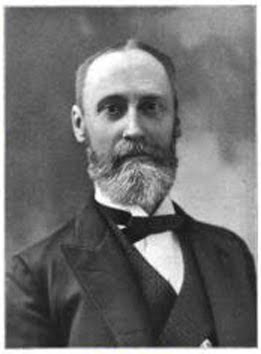 A great variety of fine cufflinks were created in the decades near 1900. Styles ranged from Victorian to Art Nouveau, Arts and Crafts to Art Deco. One of the firms contributing to the melange of miniature cuff masterpieces was George O. Street & Sons.

In 1837 George Street established one of the first jewelry manufacturers in the United States. Located in lower Manhattan the firm created gold rings, seals, watch fobs and other jewels for the carriage-trade jewelers of the day, including Tiffany & Company. In 1892 George Street retired to the family manse in Great Barrington, Massachusetts and passed leadership of the firm to his son George W. Street (pictured above). The firm remained in business until about 1950. Of particular interest are the beautiful gold cufflinks created under the leadership of the founder's son in the years around 1900.

George O. Street cufflinks are miniature works of art finely crafted in gold. The firm's artists and craftsmen excelled at exploiting golds sculptural potential, creating gold cufflinks with dramatic shapes, intricate designs, and subtle textures. The gold was an integral part of the design - not just a bright setting for gemstones or a shiny surface to be elaborately engraved.

The above Celtic Revival cufflinks featuring intricately interwoven knotwork (plaits) are a wonderful example. The endless knots fill the inner borders of the cufflinks and encircle raised oblong centers of brightly polished gold. The subtle texture of the plaits and the natural patina of the precious metal throw the design into dramatic relief. Crafted in 14kt gold, circa 1900. 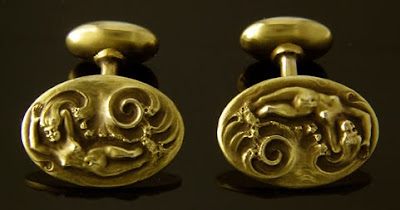 The Puritan settlers of the New Haven Colony were among the Street family's ancestors. No doubt their rigid sense of probity would have been offended by these Art Nouveau cufflinks created 250 years later by George O. Street & Sons. America had come a long way since the 1600s. 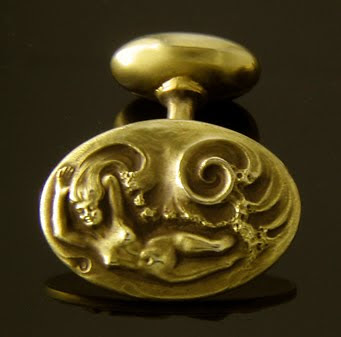 Close-up of "Nymph in Waves" cufflink.

Ocean nymphs enveloped in crashing waves and frothy seas were a classic Art Nouveau theme. Sometimes referred to as "Nymph in the Waves" or on the west coast "Surfs up, Nude", the risque scene was favored by makers and wearers of gentlemen's jewelry and accesories. These dramatic cufflinks beautifully illustrate the firm's ability to work with gold to create richly detailed miniature works of sculpture. The result is astounding when you consider that the cufflinks measure less than an inch across. 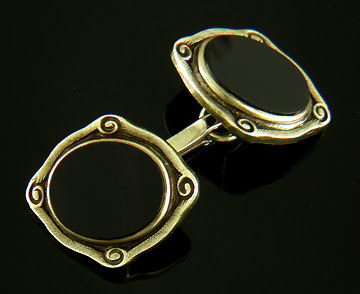 An example of the free flowing, organic forms of American Art Nouveau, the above cufflinks mysteriously glow with dark Onyx centers surrounded by undulating, spiraling gold borders. The upper surface of the gold is engraved with a subtle bark or snakeskin-like pattern. The contrast between the dark Onyx and warmth of the gold is heightened by the natural patination of the gold. For some reason, these cufflinks always remind me of a dark night sky lit by a few sparkling stars.

George O. Street & Sons created beautiful jewelry and cufflinks from 1837 to about 1950. During that period the maker's mark of the firm was an "S" encircled in an oval. Found on the reverse of the cufflinks, the maker's mark preceded, or sometimes split, the gold purity mark.

To view these and other elegant cufflinks from the past,
please visit our Antique Cufflink Gallery.