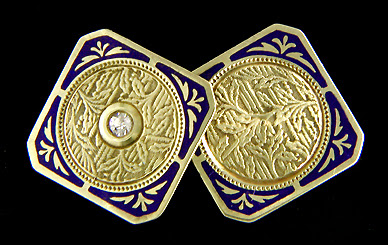 Charles Keller & Company was a prolific maker of fine cufflinks during the early 20th century. Although not as recognized as Carrington & Company or Wordley, Allsopp & Bliss, Keller created beautiful cufflinks in a variety of distinctive styles.

Among the firm's specialties were cufflinks that elegantly accented rich yellow gold with regal blue enamel. The cufflink pictured above is a wonderful example. Set with small diamonds and featuring beautifully engraved centers, the corner's of the cufflink are finished with stylized floral motifs highlighted in vibrant blue enamel. 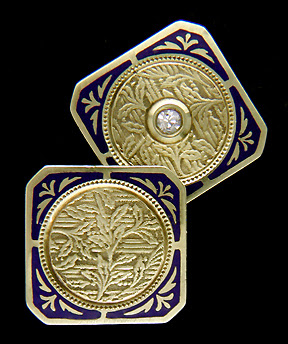 The intricately engraved centers are a miniature scene of a rippling body of water with upward striving plants in the foreground. The theme of aquatic flora is repeated in the blue enamel and gold motifs of the corners. Crafted in 14kt gold, circa 1925. 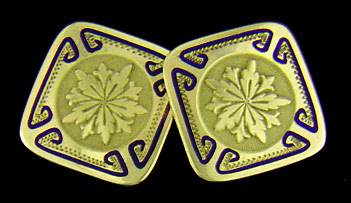 Keller created cufflinks in both 10kt and 14kt gold. The above 10kt gold cufflink features a dramatic star burst or stylized flower head motif. Around the edges an inward-turning stipple pattern is outlined in blue enamel. The lower karatage gives the gold a pale, almost washed out appearance that nicely contrasts with the bolder color of the enamel.

This pair of Keller cufflinks is from the Arts & Crafts period of the early 1900s. The yellow gold centers are polished to a mirror-like finish and surrounded by captivating blue enamel borders. A wonderful example of the simple elegance of Arts & Crafts design.

The maker's mark of Charles Keller & Company is an elongated "C" followed by a "K". Inside the "C" a "10" or "14" indicates the purity of the gold. The maker's mark is usually found stamped on the crossbars (as pictured above) or the reverse of the cufflinks. 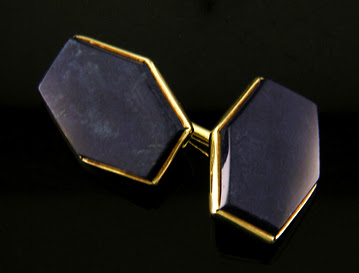 In addition to beautiful blue enamels, Charles Keller & Company also created cufflinks set with striking blue gemstones. This blue and gold pair features the exotic gemstone sodalite. The gemstone is reminiscent of a dark night sky with a few wispy clouds illuminated in the moonlight. Along with Lapis lazuli, sodalite was favored by Art Deco jewelry designers because of its intense, rich blue color.